As disciples of Jesus Christ, we are equipped to serve outside and inside our church walls. Take the spiritual gifts assessment and then sign up for a ministry that is best for you.

Discover Your Gifts
JOIN A MINISTRY

The Bookstore Ministry operates the physical store (located in the narthex of the church) as well as its online site at bookstore.fbcsomerset.com. You will find Christian literary staples like bibles, bible studies and devotionals. Also, the store houses books on an array of topics ranging from parenting to finances to health and wellness.

The Culinary Ministry expresses the humility and love of Christ through serving meals to the FBCLG community and beyond. Whether it is breakfast, brunch, lunch, dinner or snacks in between, this faithful ministry does the planning, food preparation, cooking and service for activities that often has hundreds in attendance.

In addition to supporting many of the programs and events hosted at the church, the Culinary Ministry also serves the community by:

The Daughters of Zelophehad is a FBCLG ministry that provides support to women of every age and stage of life. We seek to create space for women to develop holistic relationships with God that translate into healthy relationships at work, home and play.

Then the daughters of Zelophehad came forward. Zelophehad was son of Hepher son of Gilead son of Machir son of Manasseh, of the clans of Manasseh, son of Joseph. The names of his daughters were Mahlah, Noah, Hoglah, Milcah, and Tirzah. They stood before Moses, Eleazar the priest, the leaders, and all the congregation, at the entrance of the tent of meeting, saying, “Our father died in the wilderness; he was not among the congregation of those who gathered themselves together against the Lord in the congregation of Korah but died for his own sin, and he had no sons. Why should the name of our father be taken away from his clan because he had no son? Give to us a possession among our father’s brothers.” Moses brought their case before the Lord. And the Lord spoke to Moses, saying, “The daughters of Zelophehad are right in what they are saying; you shall indeed let them possess an inheritance among their father’s brothers and pass the inheritance of their father on to them. (Numbers 27:1-7)

We Want to Hear From You!

Tell us what you desire in a ministry designed to meet your needs as a woman. <<Take the survey>>

Founded and managed by Pastor Emeritus DeForest B. Soaries, Jr., dfree® is a transformational, lifestyle movement that promotes financial freedom through values-based principles and practical approaches to financial management.

Faith Formation Ministries are committed to equipping and educating disciples through opportunities to engage in a process of lifelong learning and applying faith to all aspects of congregational and daily life. We are dedicated to serving all of our community no matter what stage you are in on your faith journey. So whether you are young or more seasoned, just beginning your faith journey or a long time Christian, we have something for YOU! Connect with our small groups, Sunday School, and other discipleship opportunities to further nurture your faith.

“When people see us living by faith, they will become curious about Christ.”

Global Missions mobilize members of FBCLG to participate in global Christian witness through various educational initiatives. FBCLG has partnered with Lott Carey to support ministries of evangelism, compassion, and advocacy to impact lives around the world. Through prayer, financial and technical support, participation in mission assignments and conventions, we will work towards transforming lives to reflect God’s values of justice, love and mercy.

Our vision is to have a culture of health and wellness within the First Baptist Church of Lincoln Gardens that is integrated in the everyday lives of church members and across the ministries of the church.

“Beloved, I pray that in all respects you may prosper and be in good health, just as your soul prospers.” (3 John 2)

The Hospitality Ministry practices hospitality as modeled throughout the bible. Our Purpose is to exude the love of Christ to our guests and members that they may be transformed from strangers into the family of God. We are striving to be a loving model of warmth, to be friendly and to exhibit kindness to our guests and congregants through the act of hospitality and through our words.

The Hospitality Ministry provides coverage for all worship and homegoing services.

“Be hospitable to one another without complaint. As each one has received a special gift, employ it in serving one another as good stewards of the manifold grace of God.” 1 Peter 4: 9-10

The mission of the Media Ministry is to increase access to God’s life-changing Word and provide opportunities to experience the glory of God through new technology. Each week we broadcast live worship services to the world, as well as produce transformational video segments of personal testimonies and special events.

Experienced and novice volunteers are welcome. Training on all audio visual equipment is provided.

“No eye has seen, no ear has heard, no mind has conceived what God has prepared for those who love him.” 1 Corinthians 2:9

The goal of Spiritual Boot Camp is to have men strengthen their relationship with God; draw closer to God; experience God and hear God for themselves; reflect on and improve their family lives, personal lives, job interactions and areas of weakness and struggle. Men of all ages (21 and above) can join the Men Building Men; there are no big “I’s” and little “you’s”…..just brotherhood!

As iron sharpens iron, so one person sharpens another. (Proverbs 27:17)

We reach out to those within our community and beyond to extend an invitation to accept Christ as Savior and Lord and to follow His teachings as revealed through Scripture, the preached Word and the Holy Spirit.

Some of our services include:

Music and the Arts

Hallelujah is the highest praise! Each week, our worshipers are lead to lift their voices and offer their praise to God through our three pillars of praise: 1) Praise & Worship, 2) Choirs & Ensembles and 3) Liturgical Dance. Our Music and Arts Ministry has age-friendly offerings to involve all of God’s precious people. Inquire and find out more!

“The trumpeters and musicians joined in unison to give praise and thanks to the Lord. Accompanied by trumpets, cymbals and other instruments, the singers raised their voices in praise to the Lord and sang: “He is good; his love endures forever.” (2 Chronicles 5:13)

In June, the Scholarship Ministry gives financial awards to eligible high school graduates who will attend two-year community colleges, four-year institutions or technical schools. The Ministry has successfully awarded more than $1,354,980 in scholarships to approximately 1,107 students since its inception in 1964. In addition to giving scholarships and book awards every year, the ministry hosts informational events to assist youth and their parents in their higher education journey.

Meetings are the first Monday every month September – June. Email scholarship@fbcsomerset.com to join the ministry or attend a meeting.

High school seniors who would like to apply for a scholarship must register in advance for a mandatory orientation. Registration is open now and ends December 31, 2022. Eligible candidates are high school seniors who have been an active church member for at least two years and has served 18 months in a FBCLG Ministry. <<Click to register for the scholarship application.>>

The Security Ministry provides protection for FBCLG community at all onsite activities. The ministry is comprised of retired law enforcement officers who are NJ certified armed guards.

FBCLG is blessed to have a thriving senior fellowship where hundreds gather virtually for bible study every Tuesday, book discussions during a reading club, and movie viewing parties.

Ministry Description:The Usher Ministry maintains a spirit of hospitality in the sanctuary and supports the orderly flow of the worship experience by escorting individuals to their seats, helping those who need special accommodations and manages the collection of tithes and offerings.

Scripture:
“Better is one day in your courts than a thousand elsewhere; I would rather be a doorkeeper in the house of my God than dwell in the tents of the wicked.”

Through a variety of spiritual practices including guidance, comfort, and counseling, the pastoral care department serves FBCLG members and their community during major life milestones and challenges. <<Read more>>

The Veterans Ministry at First Baptist Church of Lincoln Gardens is dedicated to serving the military and veteran population that is currently serving or has honorably served our nation, both men and women on Active Duty, the Reserves, National Guard and Retirees that have sacrificed their lives for our freedom. The Veterans Ministry vision is to provide services that support current service members and veterans by offering information and referral services to address the special needs of our service members by offering services for: Employment, Job-Training, Counseling, Healthcare, Veterans Benefits and Housing.

Our mission is to engage the youth of all ages from birth through high school within First Baptist Church of Lincoln Gardens and the surrounding communities in a variety of ministry and outreach activities that will continually develop them spiritually, culturally and relationally.

“…and how from infancy you have known the Holy Scriptures, which are able to make you wise for salvation through faith in Christ Jesus” (2 Timothy 3:15). 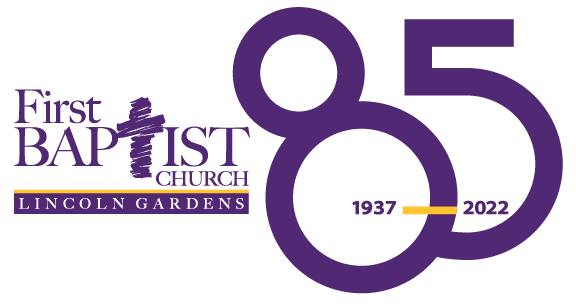